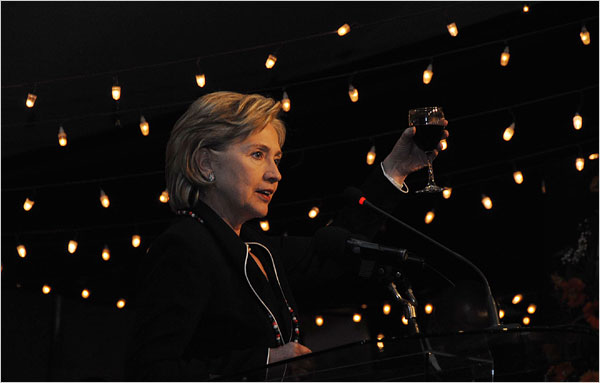 ANTA MARIA, Cape Verde — After a grueling seven-nation, 11-day trip, Secretary of State Hillary Rodham Clinton wrapped up her Africa tour on Friday by reaffirming her promise to renovate American relations with the continent.

“I have seen the joy and energy Africans have, evidenced not just by the boogieing, but by the hard work and perseverance,” she said, referring to a recent comment from her husband, former President Bill Clinton, that she knew how to “boogie” with African dancers.

“And we’ve seen the worst humanity can do to itself,” she added, presumably referring to Congo, where Mrs. Clinton met victims of a brutal civil war that just does not seem to end.

Mrs. Clinton seemed satisfied that she had accomplished her mission: strengthening American relations with crucial allies on the continent, like Nigeria and South Africa, and sending a message of “tough love,” as she called it, to nations like Kenya and Congo.

Over all, she said, the United States wants to work more closely with African nations as a partner, not simply as a patron or dispenser of aid. In exchange, she said, African leaders must deliver democracy and good government.

Mrs. Clinton vowed to stay on top of Africa, even after she gets back to Washington, closely monitoring the issues she addressed on her tour. She also pointed to Cape Verde, a set of palm-studded islands best known for their beaches and enormous tourist hotels, as an example of what good leadership can do.

“This is possible,” she said. “You create not just economic growth but a sense of human dignity and possibility.”

Kenya. South Africa. Angola. Congo. Nigeria. Liberia. And finally Cape Verde. Mrs. Clinton saw with her own eyes some of Africa’s most promising countries — and some of its most troubled ones. In Kenya, she pushed for the government to prosecute perpetrators of the postelection violence last year. In South Africa, the big issue was Zimbabwe and how the South African government should do more to help ease the crisis there.

In Angola, the theme was good governing practices and oil, a strategic concern of the United States given the many inroads China has made there and elsewhere in Africa in its hunger for natural resources. In Congo, Mrs. Clinton was passionate about the need to end the nation’s rape epidemic.

“The secretary’s visit to the heart of the world’s deadliest war zone in eastern Congo was a potential game-changer for that conflict,” said John Prendergast, a founder of the Washington-based Enough project. “Her commitment to addressing root causes such as the conflict minerals that power our electronics industry was a refreshing contrast to the usual disaster sympathy tourism of visiting dignitaries.”

“Now,” he added, “comes the hard part: making good on the promises and living up to the high expectations engendered by her visit.”

In Nigeria, Mrs. Clinton pressed for electoral changes. In Liberia, she praised the country’s president, Ellen Johnson Sirleaf, the only woman in Africa to be elected head of state.

The Liberian visit had a special warmth, almost like a meeting of long-lost cousins. Liberia was founded in the 19th century by freed American slaves, and the country’s flag, the people’s names and even the police uniforms with plastic-brimmed hats were all reminiscent of the American versions. Mrs. Clinton received possibly her most exuberant welcome there, and a Liberian man with a long wooden horn followed her around most of the visit, blowing out loud funny noises whenever she said something striking.

In Cape Verde, Mrs. Clinton seemed to have few bones to pick. For once, she said, she had a cheat sheet on a country that included a list of far more positives than negatives. The country has fewer than 500,000 people and has escaped the turmoil that has engulfed so much of Africa. The all-inclusive, poolside buffet resorts here feel like something found in Cancún or the Bahamas.

On Friday, just as she had at every stop, she started her speech by saying, “I bring you greetings from President Obama.”

She called him a “son of Africa” and said that under the Obama administration, the United States was determined to help Africa reach its promise.

(Excerpt for this news found at this link)